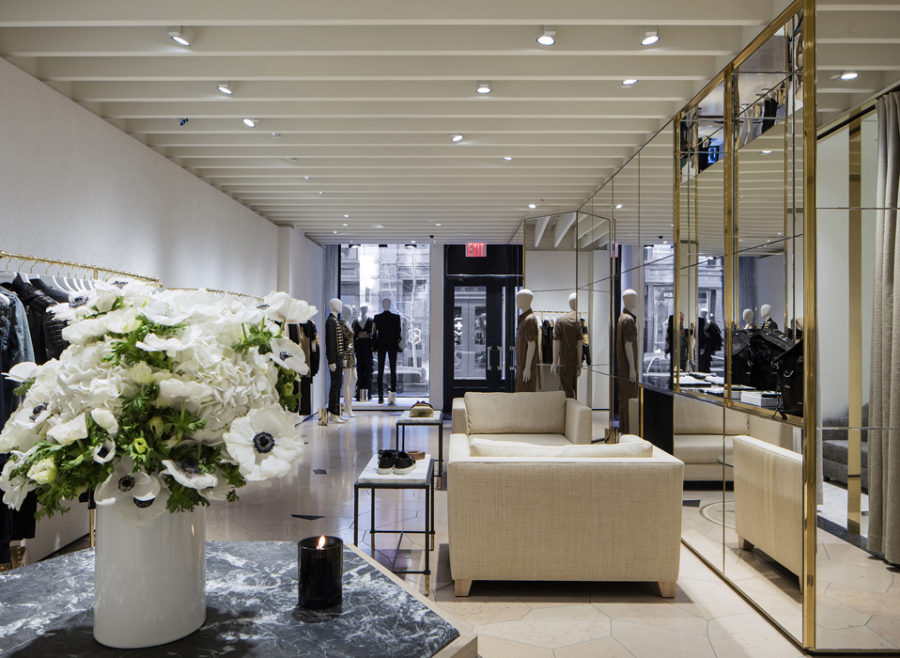 The house of Balmain announced the opening of its first American flagship.
Set on 100 Wooster Street, in New York’s SoHo neighborhood, the boutique offers the brand’s men’s, women’s and accessories collections—and beginning this summer, it will display the new collection of Balmain Kids, as well.

The Location:
For Olivier Rousteing, there was never any question where Balmain’s first American boutique would be located. “It had to be SoHo,” explains the Parisian house’s Creative Director. “Anyone who knows me knows that I find America incredibly inspiring.
I admire its uniquely open spirit, mix of peoples and impressive culture—and New York is all that, multiplied by a thousand! I fell in love with the city the first time I visited, and ever since, I try to see as much as possible each time I’m there—but what most intrigues me is that amazing mix of energy, creativity and beauty that you find in
downtown Manhattan.”

The Market:
“Olivier’s obviously done an amazing job in helping to introduce this historic house to America,” points out Emmanuel Diemoz, Balmain’s CEO. “With each collection, interest and sales have grown exponentially. But as satisfied as we are with that growth, we’ve always been frustrated that so much of our collection has been inaccessible to the American shopper. This new flagship store will allow us to show a much more complete selection of Olivier’s designs for men, women and, soon, kids—something that I expect will help sales grow even more quickly on that side of the Atlantic.”

The Brief:
Cutting and pasting the Parisian flagship’s iconic Haussmannian décor into SoHo’s unique 19th-Century industrial streetscape of brick façades, cobblestones and iron columns “was never an option,” explains Diemoz. “Instead, our brief for the architects at Studio KO directed them to channel Balmain’s history, while reflecting Olivier’s strongly
modern DNA and adapting both to SoHo’s signature style and America’s distinct design sensibility—and we couldn’t be happier with what the result.”

The Inspiration:
For the 2,150-square-foot (200m2) interior, Olivier Marty and Karl Fournier of Studio KO give a fresh twist to the house’s recent retail design choices. While Balmain’s Paris flagship is imagined as a classic Parisian apartment for founder Pierre Balmain and the London boutique is designed as his would-have-been Mayfair pied-à-terre, the new SoHo space riffs on Villa Balmain, the beautiful mid-century vacation home on the Italian island of Elba that served as M. Balmain’s retreat. “For us, this project was much more architectural and residential than decorative and retail,” explains Marty. “I like to think that the space that we have created could actually serve as the interior of a
modern house perched on a Mediterranean cliff.”

The Choices:
Behind the restored 19th-Century black façade, the architects have arranged a succession of clean, white residential-like spaces, all set on one central axis. Inspired by postwar American design’s generosity of volume and love of simplicity, the overall ambiance is one of lightness and clarity. There are many references to the greats of mid-century art and design—thick plaster walls recall the signature styles of Barragan and Niemeyer, a ceiling pattern of white beams is inspired by Phillip Johnson and the perspective of repeating black marble-lined archways channels the spirit of De Chirico.

There are also several allusions to the house’s original flagship and ateliers, including repeated touches of gold and brass, impressive mirrors and re-editions of classic 20th-Century French furniture designs. Marty and Fournier injected a clever play on the classic beige stone floors found in Balmain’s ateliers—with the architects imagining “taking a sledgehammer” to those cool geometric patterns of repeated black-stone insets, creating a novel Italian opus of irregular shapes that would not have looked out of place in M. Balmain’s mid-century Mediterranean dwelling. The crowning touch of that island home? A large 19th-Century replica of a classic Greek statue that evokes Pierre Balmain’s collection of classic terracotta figurines.