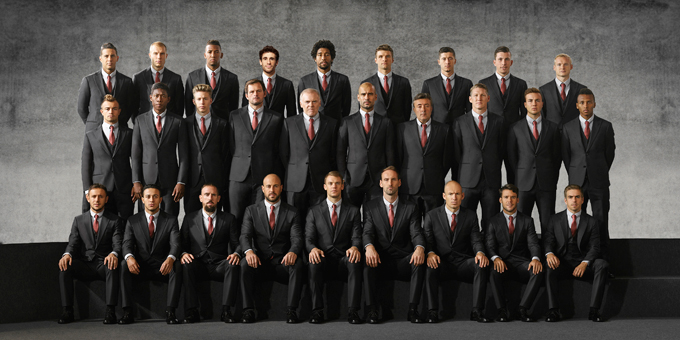 Giorgio Armani unveils the official team photograph of FC Bayern München wearing their new Giorgio Armani made-to-measure uniforms.
The designer has created the clothing for the club – the 2014 champion team of Germany’s Bundesliga and winners of the Champions League 2013 and the FIFA Club World Cup 2013 – thus continuing his long-standing relationship with the world of international football, which started back in 2007-2009 when he made the formal uniform for Chelsea F.C.

The new wardrobe for FC Bayern München, which comes from the Giorgio Armani Made to Measure Collection, has been provided to the players and management staff – 77 men and 3 women.

The uniform includes a suit in anthracite grey wool/cashmere, with a jacket with two buttons and rounded lapels, waistcoat and flat-front trousers, to be worn with a reinforcedcotton shirt in light grey with hidden buttons.

The look is completed by a tie with a red micropattern on a grey ground – a tribute to the club’s official colours – classic black lace-up shoes and a duster coat.
All of the garments are customised with a label stating: ‘Giorgio Armani for’, followed by the name of the wearer.