Giorgio Armani announced the opening of the new Armani / Istanbul concept store at Avenue Abdi İpekçi 41, in Nisantasi, the most prestigious luxury area in the capital, located in the European part of the city.

Spanning six sales floors, with a total surface area of about 1,800 square metres, Armani / Istanbul continues the firm’s strategic programme of opening concept stores around the world that was inaugurated in 2000 with the launch of Armani / Manzoni 31, Milano. 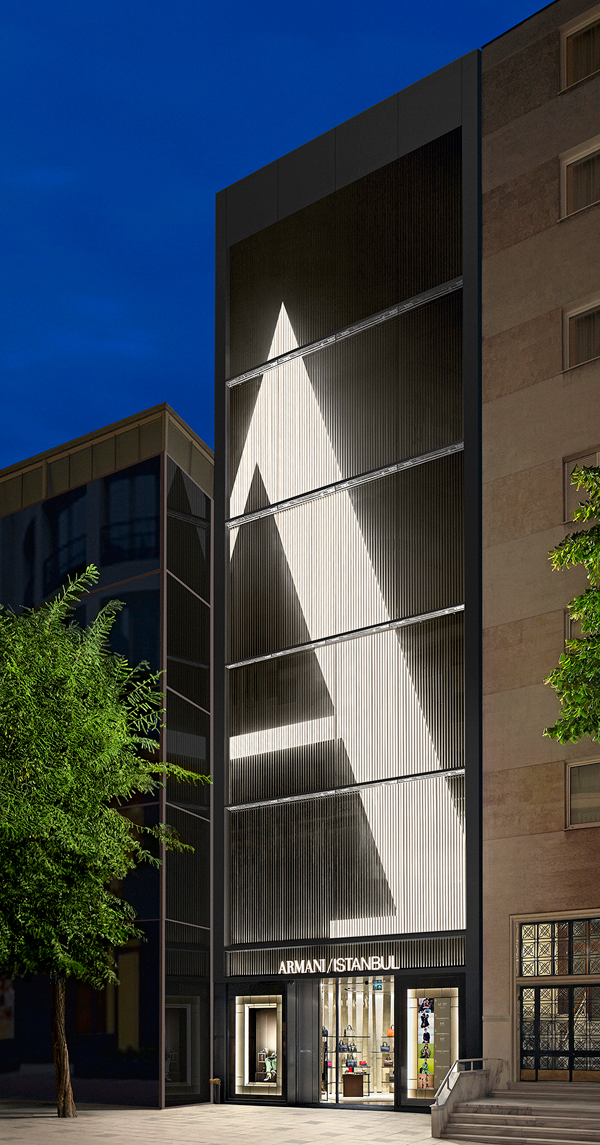 It offers a composite space in which to fully experience the Armani fashion aesthetic, uniting the various collections for men and women under one banner. The collections featured are: Giorgio Armani, Emporio Armani, EA7, Armani Jeans and Armani Junior.

‘I am very proud of this opening because it represents an important step in my brand’s expansion strategy, which is focusing on international world cities: as a transcontinental city, straddling Europe and Asia, Istanbul is, of course, truly cosmopolitan. The new shops within the concept store, including the first in the city dedicated to Giorgio Armani collections, follow a principle of integration and harmony while retaining recognisable, distinctive features that belong to the individual brands. I wanted the whole space to embody the articulated consistency of my world, particularly visually,’ says Giorgio Armani.

Armani / Istanbul is located on Abdi İpekçi Caddesi, one of Turkey’s most famous luxury retail streets.
The building has been designed and built to become a new architectural landmark in the Nisantasi luxury shopping district, thanks to its impressive facade and extraordinary interiors, which were specially designed by Giorgio Armani in collaboration with his in-house team of architects.

The main facade is made entirely from bronze-coloured metal strips that create a large, bright, iconic letter ‘A’ that occupies the full height of the building. The back of the tower, clad in greige metal, recreates the large letter ‘A’ in negative space by means of vertical strips.

The curved and enveloping lines create a common thread of design that runs through all of the interior spaces, which are also united by a colour palette of predominantly soft colours: grey, silver and sand, contrasting with white ivory and black.
The different levels are connected to each other by a staircase that displays a decorative bamboo motif, as well as by the elevator.

The store contains the first Giorgio Armani boutiques for men and women to open in Istanbul. They sit respectively on the ground floor and first floor of the building and possess an intimate and elegant atmosphere. The faux-finished ceiling, walls with decorative bamboo elements, stone floor in light greige, grey linen rugs and Armani/Casa seating create a sophisticated and refined mood.

On the first floor, in keeping with the aesthetic of the Giorgio Armani boutique, there is a roof garden with round, enclosing seats and groups of palm trees.
The areas of the Emporio Armani and EA7 collections, on the second and third floors respectively, feature bright display units in extra-clear glass, walls covered in exquisite fabric and contrasting black glass, fauxfinished ceilings and light grey floors. 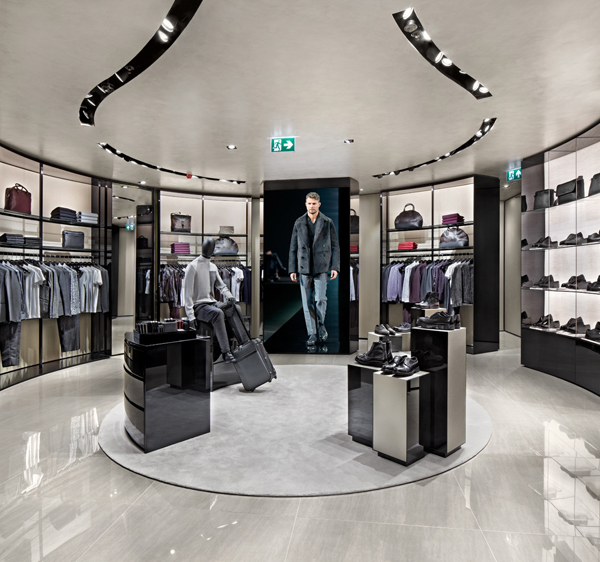 These spaces give the concept store a particularly modern and dynamic look.
On the fourth floor, the Armani Jeans store echoes some of the interior design elements of the Emporio Armani store, revised and made from lightweight materials to give a youthful and sophisticated impression.

The sales area also includes an underground floor that is home to the Armani Junior collection. Here, light wood furniture and walls with beige leather panels that alternate with light areas create a warm and welcoming atmosphere.