“If the history of art had a soundtrack, Liberty would represent its momento more rock”
The Liberty architecture of Palermo with its floral theories and big historical residences, the evanescent woman’s figure Florio and design of beginning nine a hundred with its rich vegetable stylistic feature alphabet develop a swarm of suggestions picked up and applied with dynamic and wavy lines in dry silhouette of this new collection by VINCENT.

One develops from the black and in the black and explodes in the gold to become a floral bright and romantic miracle.
The plastic forms of a gate of black iron, as a protection of series of famous villas of Palermo, with its arboreous forms taken in gold leaf, become a skirt in black matelassé, on which one opens, circular and sudden, an out cat in metal skin which, sparkling, frames waist and sides and unearth them.

The vegetative element, typical of Liberty, from simple initial winding line in the garment profiles (from the edge of a stitch in blue tricottata wool metallized to the trouser with tulip basque) on develops in a combustion of iridescent lace which goes from the gold to the opal, from red flame to Persian green, thinked either as simple decorative tail of completion in the mini dress or as a spring fired in the winter to crystallize the surfaces of two hot overcoats. 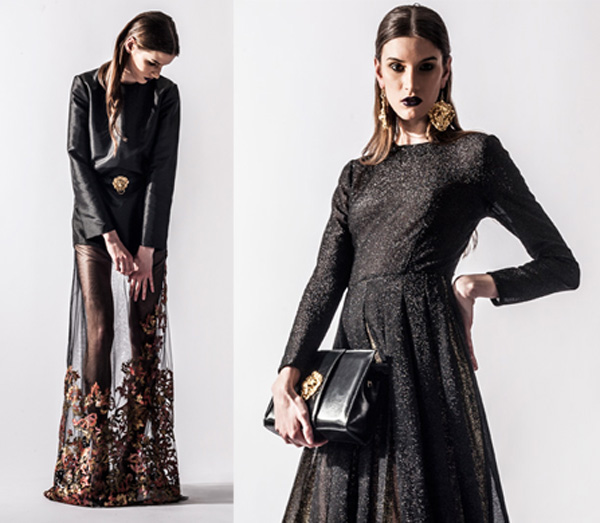 Floral beards gold metallized in fact shine on the night background of a coat design almost protect like the briers with a fairy castle.
The nakednesses of two hidden breasts, while a gilt fair protects the sides and surrounds them sealing them in the alchemica gold preciousness.

Dry figure, vertical, is narrow in the bright skirt embrodery and of the shirts, in a light that syrups the surfaces giving them new prestige, and suddenly he indulges in an over more casual, as in the sweatshirts, where in the lace, one of the luckiest symbols of brand rises again: the cow.
The nature is all here, with its time, the leaves and its flowers, they protect the residences of the nine a hundred where now the beatiful women’s bodies live.
Their lyric, perfect, romantic house is a set of rooms, a superimpose him continuos of surfaces: from the neoprene of the sweatshirts to faux leather spread of the skirts, from the tasmania wool to the cloth, by lurex-scintilla in various weights to matelassé, the forms chase each other now angular now soft, with wild spirit, leading liberty towards the rock, with natural and atavic beauty and a big prestige hand. 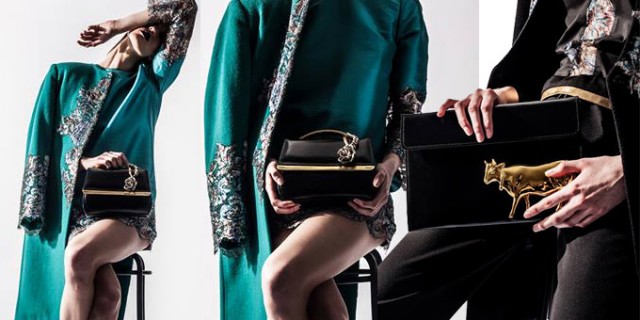 Accesories are an emersed treasure: Lion-Box is a refined casket in which the gilt lion, nobility symbol, takes the brightness of the ancient bronze shutters of the noble buildings again and it picks up in its wake the pagan and Christian symbologies, the esoteric and/or religious implications which characterize the history of those big villas.
Evolutions also for Rosalie Bag, the tribute bag to the Holy Rosalia in maxi-version and mini-and with inserts of kid’s skin metallized an Cow Bag what from Silver becomes Gold.