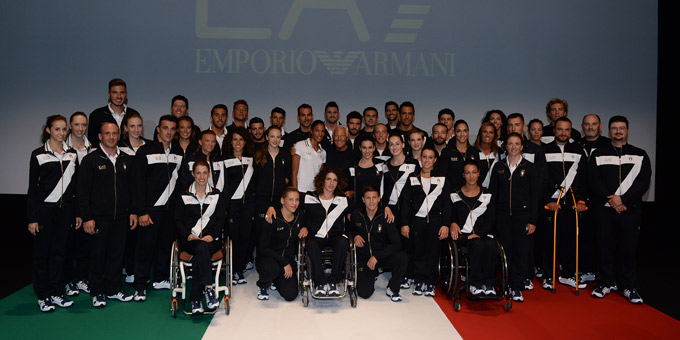 Giorgio Armani continues its collaboration with CONI, Italy’s National Olympic committee. As official outfitter once again, just as for the London 2012 Olympics and the Sochi 2014 Winter Olympics, the designer will supply all the formal and leisure wear for the athletes on the Italian Olympic and Paralympic teams for the 2016 Olympic Games in Rio.

The kit each athlete will receive includes tracksuits; waterproof jackets with hoods and central zippers, with short and long sleeves; short-sleeved and long-sleeved blue polo shirts bearing the words ‘Fratelli d’Italia’ (Brothers of Italy); Bermuda shorts; cargo pants and shorts with practical deep pockets; and two styles of running shoes – white and blue and in the colours of the Italian flag, both made using the innovative C-Cube (Carbon Cushion Control) technology, which guarantees maximum reactive comfort and rest in all circumstances. 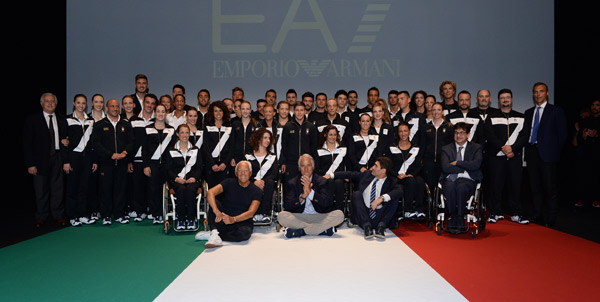 The sportswear items come in Armani’s well-known, iconic, elegant midnight blue, and bear the EA7 logo, the word ‘Italia’ and the new CONI logo all in a new galvanic gold colour.

The tracksuit for the podium has big graphic inserts in contrasting white to underline its dynamic, active character, and displays the word ‘ITALIA’ in gold on the back.

The lining of the jackets and sweatshirts carries the first verse of the Italian national anthem in gold italic script, while on the polo shirt, the opening words of the anthem appear on the blue strip under the raised collar.

Giorgio Armani has also created a special suit for athletes to wear at the opening ceremonies.
The items that will be worn by the Italian Olympic and Paralympic team at the 2016 Olympic Games in Rio will be available for sale in Emporio Armani stores from March.